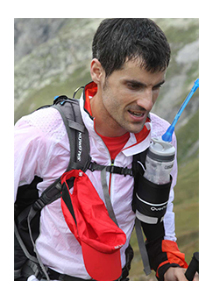 On Saturday, October 26 and Sunday, October 27, 2019, the JUAN MIGUÉLIZ - LEYRE TRAIL- Mountain Race and the Vertical kilometer JUAN MIGUÉLIZ - VERTICAL LEYRE- will be held in the Sierra de Leyre.
This race was born with a strong emotional component: a tribute to this mountaineer from the neighbouring town of Sangüesa (Navarre), who died in 2015 while practicing this sport.
In a few months, his dream became a reality, and the Trotecuto Mountain Club organised a very special sporting event performed in a privileged environment with a strong cultural component (Sierra de Leyre, Foz de Arbayún, and Yesa’s Reservoir). The race is known for its very demanding and technical route: 21 kilometers of mountain trails and areas without marked roads, with an accumulated altitude of 1,400 meters. It will be necessary to demonstrate not only resistance and speed but also skills to overcome natural barriers.
The Juan Miguéliz Leyre Trail was born as a tribute to JUAN MIGUÉLIZ ANDUEZA, and made possible by his comrades, friends and family, with the goal of keeping alive his memory and passion for mountain races, as well as his love for Sierra de Leyre, where he used to relax and train. Juan –and his values of effort, passion and perseverance– represents everything that this sport is. Runners face the challenge of going through the demanding and singular route that Juan Miguéliz would have chosen for ’his’ mountain, ‘his sierra’ (Spanish for ‘mountain range’). This is a challenge for anyone who wants to test him/herself in a mid-mountain trailrunning course.

Juan participated in many mountain races, always ranking among the top 40 and finishing almost all of them. The most notorious one was the Ultra-Trail du Mont-Blanc of 100km, in which he participated twice, producing a personal best of 15h 19m 38s and ranking the 40th out of 1,423 participating athletes. His highest position was in the ‘No hay Pitera’ race, where he finished second in 2013. Other outstanding classifications were his fourth place in the Mountain Half Marathon – Puyada to Oturia in 2013, and his 13th position in the Soplao Marathon in 2011. He also participated in the Ultra-Trail Guara Somontano of 102 km, the Ultra-Trail Somiedo Challenge of 86 km, the Menorca Trail North Coast of 100 km and the Trail Aneto-Marathon-Two Faces-Return to the Aneto of 78km. He was a very strong man! Other trails that he enjoyed in several editions were the Camille Extreme, the Half Marathon in Bera, the Half Marathon in Irati and the Half Marathon Xtreme Higa de Monreal. He also participated in the Route of the Fortresses, the Izaga Trail and the climb to Oroel, among many others. On October 20th, we will all run with Juan.